WORD FOR THE USA: FOURTH MAN IN THE FIRE 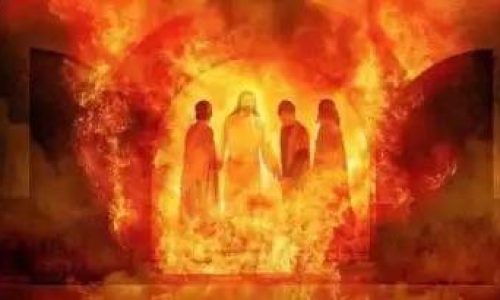 While in prayer I saw the church in America in the fire, just like in the day of Shadrach, Meshcech and Abednego. A remnant of the body in the USA is in the fire of Babylon as they refused to bow to the agenda and demonic chaos that the enemy is trying to stir in the nation. They refused to compromise and stood on His word. Some however have bowed to the golden image of political correctness and unrighteous wealth. But the Fourth Man, Jesus, is about to step into the fire with those who stood. Visitation from the Lord is about to come in a manner that will shake the powers of the world and bring them to their knees.

Even as Nebuchadnezzar renamed these three men, the systems in the US tried to rename and reframe the church to be servants of their agenda. As the Fourth Man steps in I see the Lord calling you by your true name again. Shadrach will be called Hananiah again, for God has favoured you church. Meschech will be called Mishael again, for you are what He is as the body, full of power, glory and majesty. Abednego will no longer be called the one who serves the king of Babylon, but will be called Azariah – the one who Jehovah has helped! True identity as sons of God is being restored.

Ungodly systems is starting to implode, but the Kingdom will arise. The Lord will feed you and sustain you with what is contrary to everything the kings of the world try to present to you. His fruit, the fruit and the power of the Spirit, will awaken and set you apart in this day. You will shine again like a city on a hill. You will walk in great discernment because of what He feeds you. It will not be about this agenda or that agenda, narratives from Babylon will loose its power over you as discernment arises in the body. You will know the taste of Truth, making you hate the taste of anything else.

From this I saw a white eagle rising in your nation. But it was an eagle that seemed to be clothed in doves feathers. A prophetic movement will arise within the body where powerful prophecy will flow out of the whole body in great love and innocence. These holy, pure, undefiled eagles will speak with authority over the nations silencing the cries of destruction from the kings of Babylon. Their love for the Lord and broken humanity will make them unstoppable. Don’t mistake gentleness and innocence as weakness. The Holy Spirit came down like a dove and Jesus is the Prince of Peace. Is there any weakness in them? No! Just like the Prince of Peace they will:

…’CUT OFFthe chariot from Ephraim and the horse from Jerusalem; The battle bow shall be CUT OFF. He shall speak PEACE TO THE NATIONS; His dominion shall be ‘from sea to sea, And from the River to the ends of the earth.’’ Zechariah 9:10

These eagles will establish strength in the body, redeeming it and empowering it with an inner flame that will cause the scent of the fires of Babylon to disappear from them completely. They will smell like those with new white garments, those with gold refined by the fire and they will receive balm to see as He sees.

As you stand the Fourth Man appears and His kingdom reign will once again flood the nation! He will be glorified and those used by darkness will bow to His majesty.